Cited Journal data show how many citations a journal received in the JCR year. Cited journal data is relevant when analyzing metrics such as the Journal Impact Factor and Market Share. Tables on the page provide extensive data for the following:

In 2017 data and for all subsequent years, the Cited half-life metric is calculated to a resolved value. Cited half-life shows how a journal’s back-file is actively contributing to current scholarship.

The Cited Half-Life Data table will display information beginning with the current JCR Year and extend back an additional 9 years, with further historical cited years noted in the final column. Scroll to the right to see all years.

Only journals cited 100 or more times in the JCR year have a Cited Half-Life.

A higher or lower Cited Half-Life does not imply any particular value for a journal. For instance, a primary research journal might have a longer Cited Half-Life than a journal that provides rapid communication of current information. Cited Half-Life figures may be useful to assist in collection management and archiving decisions. Dramatic changes in Cited Half-Life over time may indicate a change in a journal's format. Studying the half-life data of the journals in a comparative study may indicate differences in format and publication history. 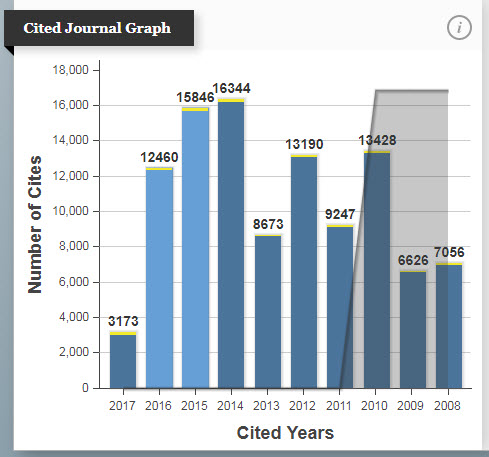 The Cited Journal Table lists the journals that cite the journal identified at the top of the page. In the table below, the cited journal is Molecular Cancer. The citing journals are listed in the Citing Journal column. All of the citing articles were published in 2012.

How to Read the Cited Journal Table

Impact Factor of the citing journal.

Citing journals are sorted in descending order. At the top is the journal with the largest number of citations to the cited journal.

The total number of citations from the citing journal. This total includes the number shown under each year and the number in the Rest column.

Publication year of the cited articles.

The table above shows that in 2012, the journal Oncology Reports cited twenty-seven articles published in Molecular Cancer in 2010.

All publication years of cited articles prior to the ten-year period defined by the table.

For example, if the cited years shown are 2012-2003, the Rest column will show the number of citations from the citing journal in 2012 to articles published in the cited journal in 2002 and any earlier year.