Citing journal data is provided in the following ways:

In 2017 data and for all subsequent years, the Citing half-life metric is calculated to a resolved value. Citing half-life shows how each journal interacts with the published literature of its field.  Journals with a high Citing half-life are citing more of the deep, archival materials in their field in the current JCR year. This indicates that older literature is still actively contributing to current scholarship.

The Citing Half-Life Data table will display information beginning with the current JCR Year and extend back an additional 9 years, with further historical cited years noted in the final column. Scroll to the right to see all years.

Only journals with 100 or more outgoing citations in the JCR year have a Citing Half-Life.

The Citing Journal Graph shows the distribution by cited year of citations from articles in the selected journal. All of the citing articles were published in the JCR year. 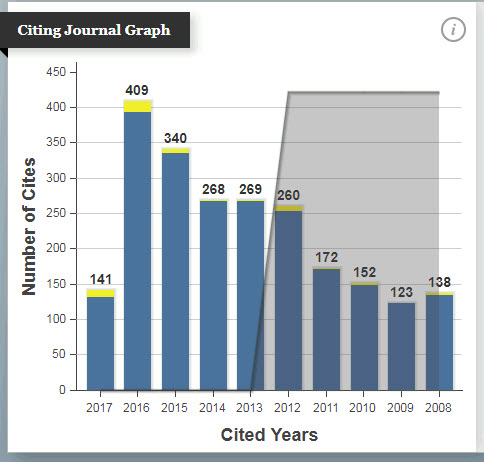 How to Read the Citing Journal Table

The Impact Factor of the cited journal.

The abbreviated title of the cited journal. Click the title to go to the full record (Journal page) of the journal.

Cited journals are sorted in descending order, from most cited to least cited.

The numbers in the All Journals row are sums of the numbers in their respective columns. ALL OTHERS refers to 1) citing journals not listed by name in the table and 2) journals cited only once by the cited journal.

The total number of citations to the cited journal. This total includes the number shown under each year and the number in the Rest column.

The publication year of the cited articles.

The table above shows that in 2012, Plant Pathology cited 12 articles published in Plant Disease in 2011.

All publication years of cited articles prior to the ten-year period defined by the table.

For example, if the cited years shown are 2012-2003, the Rest column will show the number of citations from the citing journal in 2012 to articles published in 2002 and earlier in the cited journal.

Clicking on any journal title in the table will take you directly to that journal's profile page.

Items marked as Non-Traditional are those items of a non-researched nature, such as press releases, legal proceedings, or government documents.